RAG’s energy storage facilities are highly versatile. Their wide range of capabilities contributes to security of supply in Austria and Europe, and they hold the key to a sustainable energy future. Large volumes of gaseous energy sources can be stored here. Currently used primarily for traditional natural gas, in future they will also store green gas such as hydrogen, for withdrawal at high capacity and at any time.

As a gas storage facility operator our mission is the storage of gaseous energy sources and the utilization of storage facilities for sustainable energy storage.

With over 6.2 billion (bn) cubic metres (cu m) of gas storage capacity RAG Austria AG is Austria’s largest energy storage company and one of Europe’s leading storage operators. RAG operates around 6% of total gas storage capacity in the EU. 50% of our gas reservoirs have been converted into gas storage facilities. Therefore, we make a major contribution to security of supply in Austria and Central Europe.

“RAG’s energy storage facilities are essential for the step-by-step reduction of CO2 emissions towards a sustainable energy system, the attainment of the climate targets and the use of renewable energy sources.”

Use of underground natural gas reservoirs is the safest, most efficient and most environmentally friendly way of stockpiling energy. Austria has geological structures that are ideal for gas storage.

New supplies can be stored in these formations, where gas accumulated naturally over millions of years, at depths of more than 1,000 metres. These former gas fields originated over 20 million years ago, when organic matter in the primeval ocean that occupied today’s Prealps was trapped by sandstone sediments. Over time, gas built up in the pores of the sandstone, forming gas reservoirs that can cover an area of several square kilometres. Clay strata several hundred metres thick overlie the gas reservoirs, and this natural insulating layer makes them an extremely safe means of underground storage. The proof of this comes from nature itself, since the original gas reserves were held there for millions of years.

Energy storage over the year

Natural gas is produced throughout the year, at roughly constant rates. Austria’s imports are transported along pipelines and as LNG cargoes from producing countries. The amount of gas consumed by industry, power stations and households varies according to the season and time of day. Demand is much higher in winter than in summer, and more gas is used during the day than at night. Gas must be stored to ensure that it is available when needed. Storage injections and withdrawals in recent years have shown that withdrawal periods are lengthening, and that in future RAG’s storage facilities will be required to provide even more flexibility. 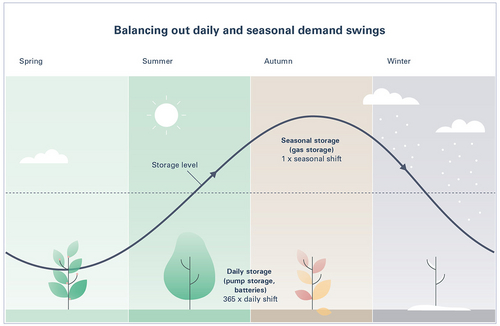