Power-to-gas comes down to this simple formula. This key technology of tomorrow’s energy systems involves producing emission-free energy using power generated from renewable sources. Using inputs such as water or biomethane which are available in abundance, water electrolysis can produce hydrogen and oxygen, and methane electrolysis or pyrolysis can yield hydrogen and carbon, another key raw material for the future.

Together with natural gas, green gas is the key to the success of the energy transformation. It means that large amounts of solar and wind power can be efficiently transported and stored, making climate-friendly energy available on demand. 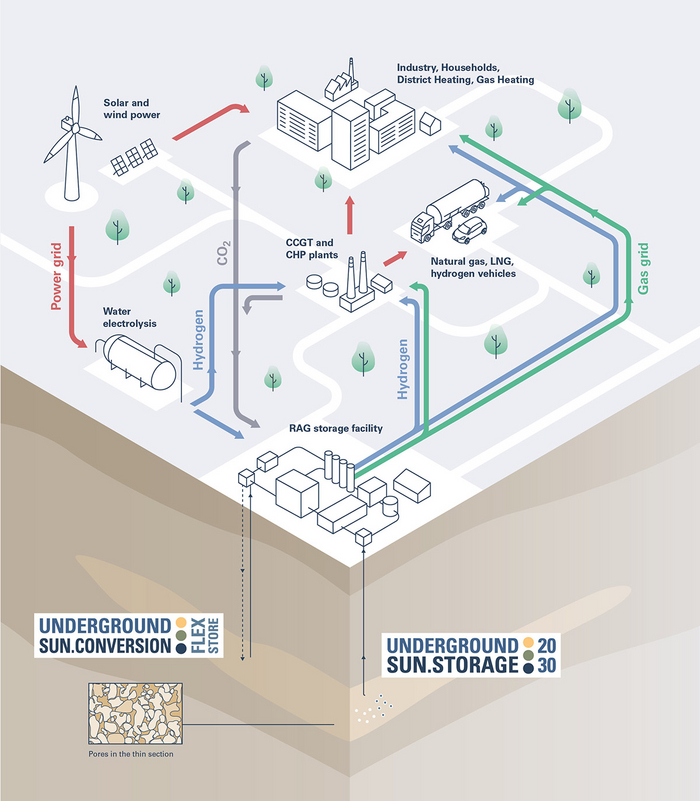 Intermittent renewable electricity output is not the only problem. Something will also have to be done with all the excess power generated by giant wind farms and solar parks at times when demand is low. The environmentally friendly power-to-gas process makes this energy storable, so that it can be kept in large-volume storage facilities, ready for use to balance out seasonal demand swings.

The way power-to-gas works is actually quite straightforward. Surplus solar and wind power is used to split water into oxygen and hydrogen by means of electrolysis. The hydrogen can then be stored for later use, for example as primary energy in fuel cells. But a further step is also possible: in methanation, the hydrogen is reacted with carbon dioxide (CO2). The CO2 can be drawn from the atmosphere or it can come from a biogas or industrial plant. The product of the process is renewable synthetic natural gas.

Today the efficiency of the conversion process already stands at about 60% – a big step forward in view of the fact that surplus electricity is often not used at all owing to the lack of storage capacity, and instead wind turbines are idled or whole wind farms taken off the grid. If the hydrogen can be used directly, the efficiency rate is even higher.

Thanks to electrolysis and methanation, electricity can be converted into hydrogen and into natural gas, making large-scale power storage possible for the first time. The process solves one of the biggest problems posed by electricity storage – shortage of space. It means we can simply turn to existing natural gas infrastructure, in the shape of the pipeline grid and large storage facilities. Instead of developing and rolling out expensive and elaborate new storage technologies, the power would be transformed into synthetic natural gas and stored in depleted gas reservoirs. 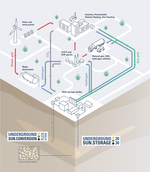